#197: Lord Capulet Speaks of the Unspeakable 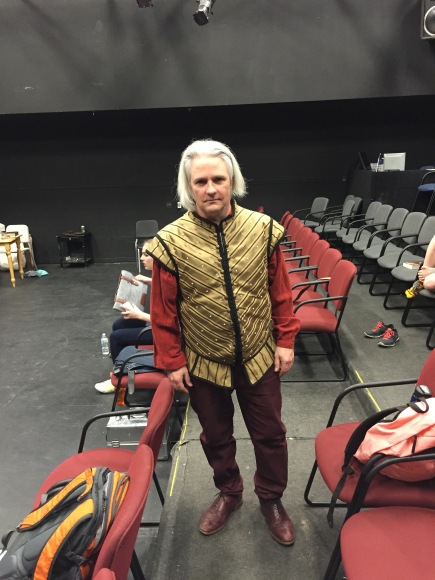 Note: Here’s a persona poem in which the speaker is aware of his author/creator and for which the writer/actor slaved all day to make the damn thing rhyme and then asked one of his fellow actors to take a picture of him as Lord Capulet. Also, this poem responds to the napowrimo optional prompt in a kind of cheater way: write a line that you are afraid to write. Well, here’s a few, but alas, they are not mine, but Daddy Cap’s instead.

Lord Capulet Speaks of the Unspeakable

What I am afraid to say
could fill a book or another play.
They say brevity is the soul of wit,
but Shakespeare didn’t know the half of it.
Or, if he did know, he left it out
and here I am alone to speak about
the unspeakable. My world is one
of obfuscation, and I am done.
Lady Capulet, my partner, my wife,
I must confess was not the love of my life
or anything like it. It’s my own fault
and this will die with me in the family vault
but, still, I have this nagging fear,
as long as we are being honest here,
that my loving wife is loving another
and worse, for shame, I suspect my brother’s
son. For this, I am in discordant tune;
Tybalt, that rat-catcher, nearly ruined
everything, my happiness and my party,
and I have been so angry that I could hardly
keep up appearances, maintain my composure,
risking a certain and most awkward exposure
when I cursed him and later introduced
him to the door. Now this Paris wants to seduce
my child, wants the hand of my daughter.
He’s a good man, I know, but no farther
can I trust him than I could throw him.
He’s rich, and while he’s a little dim
in the head, I think he’ll treat my Juliet
with as much respect as one would expect
in this time. Tybalt pissed me off to such
a degree that I must confess I was not much
paying attention to what Juliet thought of the guy.
I was thinking instead: if Tybalt were to die
it would not be so great a loss of life.
One nephew down and I’d have back my wife.