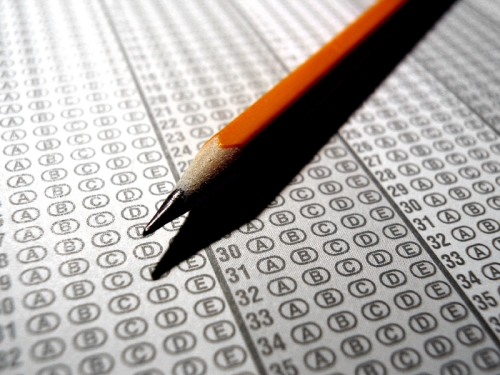 Today we were supposed to
administer the PSAT to all
sophomores and some juniors,
but something went terribly
wrong with the test booklets
and the college board
rescinded the exam.
Suddenly, we had a half school day to kill.
Our students, most of whom were
expecting a day off,
were “invited” by our administrators
to attend school, moving through
an 8 period day in 23-minute sessions.
It’s possible that 20% of our students
attended classes today.
This is what we achieved:

In second period the eight students
who arrived held a spontaneous dance party
at nine o’clock in the morning. During
third period we played beach ball hot potato.
The three students who came to fourth period
talked about Mexican food, bagels, and Canadians.
No one showed up for my sixth period and
during seventh period the ten students who came
played with their phones incessantly. In eighth
period three kids sang songs about Pokemon,
one girl read a book, and one boy worked
on getting a late assignment completed
and there was a conversation about Dungeons
and Dragons but one student accidentally
called it Dungeons and Dungeons.

I wrote this poem, composed an assignment
sheet for a new unit, sent email messages to
a couple of parents, harassed a few kids about
late work and finally learned about a different
test, a reading test, that I had neglected to
give to my freshmen this fall and all the
wonderfully useful things the results might
have told me about the reading abilities of my
9th graders and I’m thinking to myself, holy crap,
on a day on which nearly nothing happened, I still need a nap.