Tag Archives: no alcohol for 30 days

What a terrible time to stop drinking. In the first week of this glorious new year, I was so disheartened by the attempted coup, the insurrection in our nation’s capital, it would have been SO easy to drown out that despair with alcohol. Similarly, it would have been so simple (and yet impossible) to self-medicate away the death toll of 420,000 Americans lost to the Coronavirus. Conversely, a celebratory drink or two or three would have been totally justified at the inauguration of our 46th President, Joe Biden, and the first ever female, Asian-American, African-American Vice President in the history of the United States, Kamala Harris, not to mention an inaugural day that, across the country, was marred by not a single act of violence in protest, at least not on my radar. I might have raised a glass in approval at Trump’s ban from Twitter and Facebook, his second impeachment by the house, and I might have raised still another glass as his sorry ass, in a helicopter, lifted into the air from the White House, never to return. And then, I decided to dye my hair purple, the kind of decision a man of a certain age makes while drinking. I even went through with it! So many good reasons to be drinking! But I have not been drinking. You might call it a dry January–but, to be fair, I had my last drink on January 2nd, have abstained then, as of today, for only 28 out of these 30 days in the month, and, of course, the month is not over. A single day is a long time.

It hasn’t been easy. Two or three nights ago I watched Jimmy Kimmel, in celebration for his sideman Guillermo’s 50th birthday, show a montage of about 50 celebrities taking shots in honor of the occasion. Today I drove by an open-air beer garden and my favorite liquor store on my way home from an errand. It’s getting a little bit more difficult as the month closes itself out and I know I have a decision to make: was this a dry January–or the beginning of a longer commitment to live without–or with significantly less–alcohol? The jury is out. I miss it and I don’t miss it. As I’ve felt in other years when I have made this same prolonged abstinence, I am mostly glad to know that I can do it. Without withdrawals, without lapses, without any kind of detrimental side-effect (save the purple hair), I have been able to live for a time, quite contentedly, without booze.

I didn’t mean for this entire blog entry to be about drinking or not drinking. It just seems to be a little bit front and center. Maybe, for me, it feels less casual of a thing than it does for most Dry Januarians. My parents drank every day of their lives for as long as I can remember, and in my middle to late-middle years, I find myself to have become the same kind of drinker. I am trying to be super conscious about how my life, or how I feel about my life, changes without it. I know that when I am not drinking, I tend to be more creative. I tend to be more productive. I feel smarter. I tend to be happier–less likely to enter a funk of melancholy. And, as much good news as there is in this new world regarding a more engaged, more compassionate, more representative administration, and regarding an impending mass-inoculation against COVID-19, there is still the residual bad news abounding and leftover in the wake of Trump; for example, today, in Los Angeles, a protest by far-right conspiracy goons prevented people from getting vaccinated! –despite this, as angry as that makes me, I do not feel the impulse to self-medicate. I am less easily rattled or annoyed. I am more present to others–maybe. I’m more engaged, as much as I can be, with my students in distance learning. I think I sleep better and my dreaming is more vivid. I snore less. This is all to the good, but there are things, sadly, that haven’t changed. Without all of that empty calorie, and even with a fair amount of exercise, I don’t think I’ve lost an ounce. I was kind of betting on that. I don’t think I’m eating more to compensate, or eating worse things for me–you know, replacing one poison for another kind of poison. But maybe I am. A single serving of my favorite gummy worm, seven little worms, is only 90 calories. That’s not bad, but there’s an occasional cookie. Too many carbs, perhaps. Thankfully, the resident teenager beats me to most of the snack food. But I bet I snacked less when I was drinking! The dumb part of my brain just wanted to see more miraculous results, and thinks to itself, alas, if there aren’t clear and positive health results (ignoring for a moment the list of benefits above), why bother? Man, I so much wanted to take a shot with all those celebrities! I mean, Guillermo only turns 50 once in his life!

I don’t know how to close. This entry feels somewhat confessional. I don’t want it to be. I don’t want to confess. I want to say that I don’t feel shame about drinking and I won’t feel shame about breaking my abstinence in February, if I choose to do so. I know there are forces in my life and in the culture at large that both want to shame me about alcohol use AND encourage me to keep doing it. What it’s about, I think–what it’s always been about, is consciousness, understanding, being awake to and honest about the relationships we have to the stuff that’s bad for us. I know I’ve said this before in past entries written around the turn of a new year: we need (I need) to drink more mindfully, to be fully aware of why I’m doing it and what it’s bringing to me, both good and bad. Meanwhile, on the eve of the last day of January, 2021, I’m still dry. And I have purple hair.

Filed under Reportage, Self Reflection, The Plague Year

Tagged as COVID-19, dry January, journal, Journal of the Coronavirus pandemic, no alcohol for 30 days 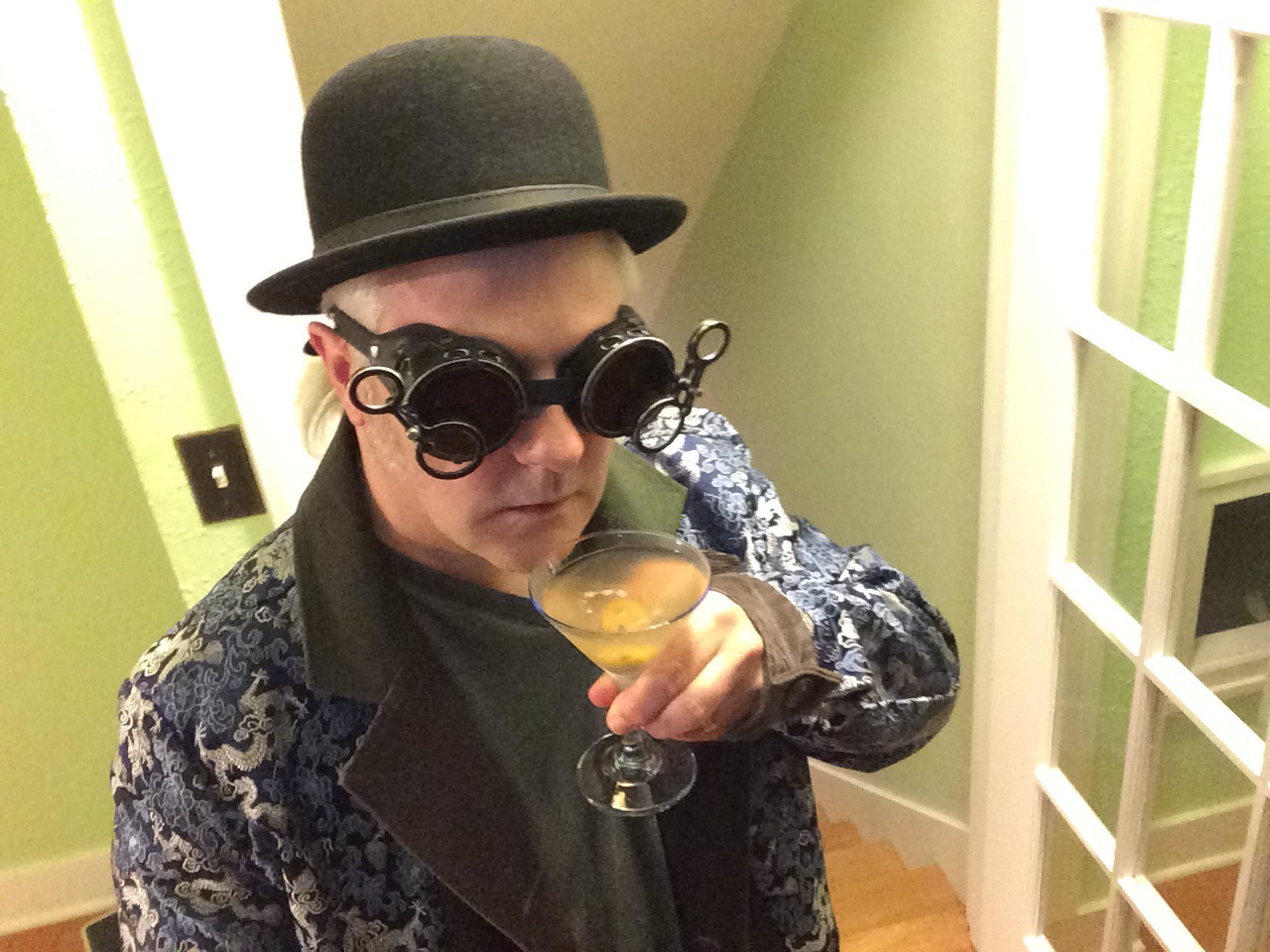 Today, from napowrimo, the suggested prompt is to take a favorite poem and find a very specific, concrete noun in it. After choosing the word, put the original poem away and spend five minutes free-writing associations – other nouns, adjectives, etc. Then use the original word and the results of the free-writing as the building blocks for a new poem.

Perhaps my favorite poem of all time might be John Berryman’s “Dreamsong 14.” Here’s the line from which I will pull my concrete noun:

And the tranquil hills, and gin, look like a drag

And from this lovely line I will choose the word “gin.” I couldn’t begin to tell you why this particular word strikes my fancy at this time. #whole30.

Here’s a brainstorm on “gin.”

Okay, enough of that. Let’s write a poem. Here’s an attempt at a formal structure that totally breaks down at the end. Sorry.

In 9 days I will be able to drink gin
according to some dietary regimen
that prescribes 30 days without sin,
at least of the alcoholic variety.

Who’s to say my first drink will be gin?
–as there are other choices, bourbon,
to be precise, a fave, gin coming in
a close second, a balance of dark and light.

It’s not like I’m counting down to gin.
I think I might live beyond 30 and again
another 30 without a drop of gin.
But this is not what I want.

I am looking forward, that’s all.
I don’t think that juniper brew,
that olive on a stick, that action
with the shaker and the dash

of vermouth could ever seem
to me a drag. Gin, like the tranquil
hills: Let there always be
comradeship between us.