Tag Archives: riding in the rain 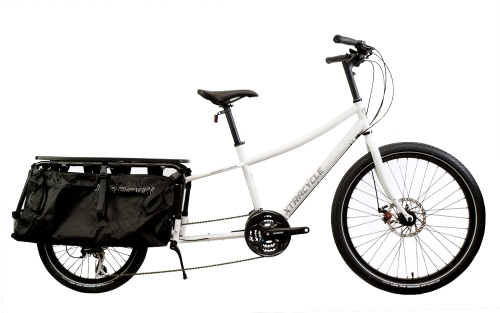 I could not remember the title (Reality Bites); all  I could remember was that some character in a film I saw a long time ago had a band called Hey, That’s My Bike, and one, I thought that was the coolest band name in the world, and two, I couldn’t stop thinking about this phrase as I tossed and turned all night in one of those states you sleep in when you’ve got a head cold and your brain is in a fog but at the same time you’re obsessing over some damn thing you’re excited about, namely, a new bicycle.

My new Edgerunner from Xtracycle arrived yesterday and Eric, from his shop The Bike Commuter, posted a picture of it on the Mighty Social Network website the kids call Facebook.  Christmas came early, and today, Friday, after the last day of work before the holiday break, I planned to get a ride to the bike store so I could ride my new baby home.  But the weather outside is frightful, downright shitty, and I’ve got a cold all up in my head and nose, also shitty. So you’d think I’d wait a couple of days, until things dried out in the weather and inside my head.

One of my chief personal weaknesses is my inability to wait very much longer than a couple of minutes for something I want.  It’s embarrassing, and it’s not a trait that I am particularly proud of, but delayed gratification and I–we don’t get along well.  So I weathered the weather and the stuffed-up head and the tickle in the throat that wants to become a cough, and I asked my wife and son to drive me to the bike shop. They dropped me off and I rode my new bike home for a half hour in the rain.  I had my gear on, so I was protected pretty much, except for the new white bike, which was getting muddy, and my cheeks, which were freezing off.  But I kept saying, hey, that’s my bike, and I smiled all the way home–and now, for the time being anyway, I am none the worse for wear–and gratified.

Filed under Bicycling, Self Reflection