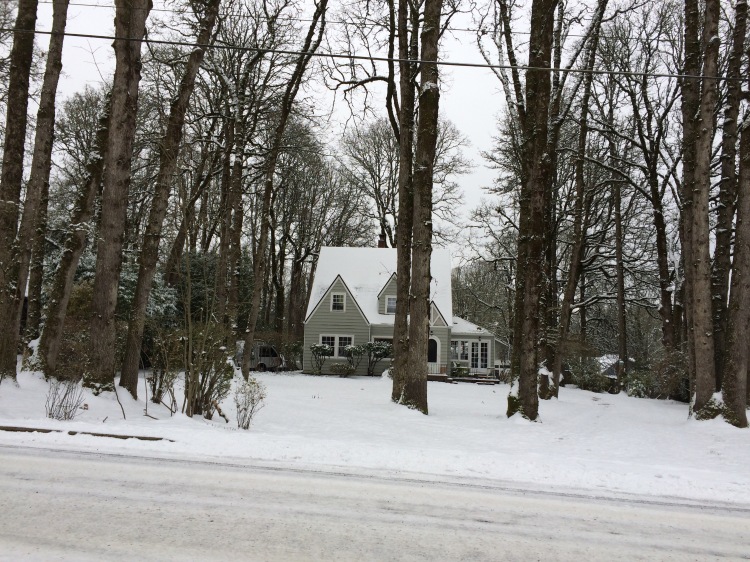 Four days, two last week and two more this week,
have been added to our holiday break, the result
of some kind of snow event, the first, hardly anything
to write home about, the second, enough for snow people
and dangerous driving conditions. A few of my colleagues
took hours to get home yesterday afternoon and I hear
some young people were stranded at their schools.
No one’s unhappy, necessarily, about the loss of teaching
and learning time from the school year, but there is always
a price to pay: a day to make up this summer, some significant
pain in the ass about units unfinished or assignments
suspended in mid-air and students desperate to recover
some semblance of success by the semester’s end, finding
themselves suddenly strapped for opportunities. And
because we can’t drive, we’re stuck with walking for now
if we need groceries or want to see someone who lives close.

But no one’s complaining.

I’m happy to see snow again. Over the last couple of years
I wondered if I would ever see it in our neck of the woods,
you know, with the warming and all, last year the warmest
on record and looking like a trend. So certain I was of this,
I failed to winterize my little camping trailer, so I’ve got
the heat blasting out there so the pipes don’t freeze.
This morning, I took a selfie in the snow, took a picture
of the house, made some big snowballs with my son,
got into a social media fight with a guy I don’t know,
and this evening, I walked out to the mailbox, folded some laundry,
read a little about our country’s impending doom, and watched
interviews on the Daily Show with Barack Obama and
Ta-Nehisi Coates. I drank wine, and I listened to some stupid
but really good 70’s rock and roll. This has been day
two of my Snowpocalypse. And I say: so far, so good.