Of Childhood Rock and Roll Fantasy

From the perspective of my suburban cultural landscape, I was not yet aware of Talking Heads or Blondie.  I hadn’t heard The Sex Pistols, The Boomtown Rats, XTC or Japan.  I had not yet discovered the punk rock and the new wave or the truly experimental prog.  I had not yet heard King Crimson or Frank Zappa.  My favorite artists were Rush, Kiss, The Sweet, and Elton John. I got my first kit and I played the drums, poorly.  I had not yet formed my first band with real musicians, but I had heard older kids play, loved music more than anything else, and I could not wait for the skill or the people and finally the music that would turn my world upside down again–so I made it all up.  I formed a band in my mind and the musicians in the band were my best friends from the 5th and 6th grade and none of them were musicians.  We called ourselves (or should I say, I called ourselves) FLARE.  We played, when we actually played, with tennis rackets. No matter how loud we turned them up, our rackets made little sound–so we lip synced to our favorite records while striking ridiculous poses.

I made pretend record albums and 45 RPM singles using construction paper, terrible photos of my friends, usually shirtless (because we all knew the girls loved musicians and musicians didn’t wear shirts), or I drew terrible and primitive pictures of them, and I made for these “recordings” song titles and actual lyrics of hundreds of songs that didn’t exist and never would.  Oh, it was glorious.  We (I) made so many records–eventually there had to be live albums and greatest hits collections.  We rivaled The Beatles from a decade earlier in productivity.  We must have made 15 albums in a year! I was so obsessed with my imaginary rock band that in the 6th grade, during class for Christ’s sake, I wrote a novel about these characters, assigned them instruments to play, invented particular stage personas for them, and then, icing on the cake, gave them all super-human powers.  And of course there were evil villains who, for some reason which I’m sure seemed reasonable enough to a 6th grader, were always after the rock stars.  It was all about rock and roll, girls, evil villains, and danger in every town and in every concert hall.  This went on and on–until sometime in the 7th or 8th grade when I realized I could actually play the drums–and then in high school where, almost immediately, I would align myself and begin practicing with people who could also play actual instruments, I put my tennis racket down (except for lip-sync competitions) and retired FLARE for good.

What’s interesting to me about this little memoir sketch is the fact that as a 12 year old pre-pube my identity as both a musician and a writer was already firmly established, forged, wrapped up, determined.  How well and how early do children understand what drives them, what ultimately will make them happy human beings?  Long before Flare, I was acting the rock star and performing for relatives who would allow it, singing Steppenwolf’s “god damn the pusher man” to adults who were so overwhelmed perhaps by the cuteness factor that scolding me for profanity and drug references I could not begin to understand was the last thing on their mind.  My parents neither encouraged or discouraged.  They let me find my way–and their insouciance was perhaps the best thing for me.  So, maybe I take their lead on this.  I hesitate to “make” my son take music lessons of any kind.  I do my best, much more overtly than my own parents did, or could (because neither of them were musical or literary), to make opportunities available for him to find what rocks his world.  Let’s listen to this record.  Let’s play around on the drums a bit.  Let’s make a father/son composition on the iPad with Garageband.  Here’s a notebook to scribble in.  Look at Daddy’s book.  Here’s some art supplies.  And, yes, here’s a video game.  Go to town, son.  See what floats your boat.

Thanks to Cary Kiest for the prompt. Happy birthday.

Thanks to Michelle Williams for insouciance.

Here are some pictures of some slightly embarrassing early work.  The band made all of its fake recordings on Scotch brand audio tape, which, for some reason, I had difficulty spelling. 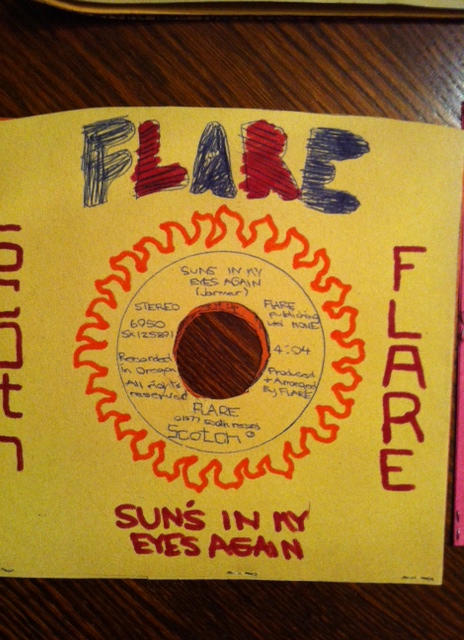 Sun’s In My Eyes Again, indeed.

One response to “Of Childhood Rock and Roll Fantasy”