Notes Toward a Musical Autobiography: Volume XV–Here Comes Everybody Survives the 20th Century 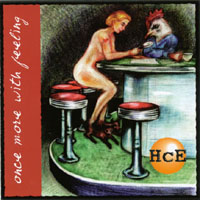 The cover of our very first CD release in 1997: The chicken head man and the naked dog foot lady, of course.

Back again so soon? I’ve got about a day and a half to fulfill my Pre-New Year’s Eve New Year’s Eve resolution of writing about the entire Here Comes Everybody catalogue before 2018. In case you’re just stepping into the fray, in short, it has been my project over the last three years or so to listen to my neglected CD collection, one artist at a time from A to Z, and write about the experience. A year ago I found myself mired in the letter H. The letter H happens to include my own band, Here Comes Everybody, which at first I thought I would just sort of skip over, but have since, for autobiographical reasons, changed my mind.

In my last entry I worked through the first six years, from 1986 to 1992 and I shared a stupid but by now kind of famous youtube video of my crazy bad self lip syncing to my own music in 1987. I was listening to and writing about the last CD we released, a 30th anniversary compendium of the first six years of songwriting and recording we ever did as a band. It’s important to note, especially perhaps for younger readers, that, in the 80s and early 90s, independent bands released their original material almost exclusively on cassette tape. Vinyl was way expensive and on its way out. CDs had just arrived, but were also cost prohibitive to produce. Everybody and their dog had a hi-fi cassette deck in their home stereo and in their cars. Cassette tape ruled the day–and for good reason. It was compact, convenient, reliable, and sonically pretty damn good.

All of the material discussed in the last installment of this series was initially released on cassette tape and had to wait 30 years until 2016 for a digital release into the world. After the cassette releases featured on Everything Is Here: 1986-1992, we continued to release albums and e.p.s on cassette tape for another five years, during which there were essentially only two releases, a cassette full-length album called Squish in 1993 and another cassette e.p. entitled Hump Day from 1995 or so. By the time these cassette records came out, the band was full-on grunge/funk/hard rock, a far cry from the synth pop of the 80s and early 90s.

How did we make this radical stylistic turn? Well, we were smitten, as was everyone else in the Pacific Northwest, by the hard rock grunge movement. It’s what we were listening to. It was raw and rowdy and full of energy and political power, and while it really wasn’t stylistically or radically different from the hard rock of the 70’s, it felt totally new and fresh and served as a rebellion against what felt like the antiseptic and artificial pop of the late 80s. And in this moment just before the Life, Friends, is Boring era discussed in the last entry, we had found a new guitar player, Jeff Bryner, a guy who was firstly incredibly inventive and secondly super prolific as a writer. So, combined with our current musical interests in guitar rock and this new dynamic member of the band, the music started to come from the guitar and NOT the keyboard. Eventually, so much so, that René tossed the keyboards altogether and got behind the drum kit. At that moment, by 1995, we were a full-on guitar band. We had left every vestige of keyboard, nu-wave power pop behind us.

I have mixed feelings about all of this. It was new and exciting and I think it was good. But the Here Comes Everybodyness of the music that René and I had been writing during the previous seven or eight years seemed to have been drained out and replaced by something else. I am proud of that work, but it sounds like a totally different band. At one point we toyed with changing our name–and I think we even did a gig or two with some new stupid identity, but it didn’t take, and, eventually, creative differences momentarily disbanded that mid-90s roster.

Some really great songs came from this era, though. Again, approaching the novelty song, our most successful tunes were often our funniest ones. From the Squish era came “I Like My Neighbors,” “My Dentist Is A Good Man,” and a song about forgetting your own lyrics during performance, entitled appropriately, “I Forgot The Words.” Here’s my favorite, the “Neighbors” tune in its original lo-fi glory:

And then something pretty remarkable happened: the advent of the professional quality HOME STUDIO. We recorded Squish (which opened with the “Neighbors” tune) on a cassette 4 track recorder. It was decidedly and unabashedly lo-fi. So grungy. I remember recording the keyboard live during the mix down! That’s just crazy. But suddenly, in 1996 or so, professional quality home recording equipment became, for the first time in human history, somewhat affordable. That was a game changer for us–and the rest of our musical history from that moment on was totally influenced by this phenomenon.

Some of the best of this early to mid 90s material ended up on a 13 year anniversary CD released in 1999, appropriately called Thirteen. One of the first of the stupidest ideas I ever had was to release a kind of greatest hits record that would collect on CD the best of what we had released on cassette over the first thirteen years. Stupid? We had no hits. We made 1000 copies, because, you know, 1000 copies is cheaper than 500–really, seriously. It cost, in 1999 about $1,000 to replicate a thousand compact discs, whereas 500 copies would cost only a hundred bucks shy of that–so why the fuck not produce 1000 of those babies?! Well, because there’s not a market for it, that’s why. However, it was fun. It felt good to give the music a digital run, but we couldn’t afford to master it, it includes crappy four track recordings, and it was, as most albums produced on CD in the mid to late 90s were, too flipping long. Who has the patience to sit through a 73 minute compact disc? Outside of the appearance of a few select tracks from this mid-90s hard rock era on the Thirteen cd, this material, so unlike us, feeling to me today not totally authentically us, will likely never see the digital light of day. Although, by special request from a single individual who was a fan of that particular era, I recently burned a copy of Hump Day and sent a single solitary CDR off into the mails. Yeah, I could do that again.

Once More With Feeling. Kids in a candy store, having put together our first home basement studio with bonafide real professional recording equipment, we wrote and recorded our first album to be released on a compact disc. On this record, we primarily started the practice of promoting ourselves as a duo. The band, then, consisted of past band mates, HCE alum, who were willing to lend a hand. And we got almost every one of them involved somehow, going all the way back a decade to our very first full line-up.

Its weaknesses are that, again, it’s too long. It’s super self indulgent. We included everything, even the most silliest of things like jazz improvisations over spoken refrigerator magnet poems, nutty manic tunes that are nearly unlistenable, the absolutely absurdist spoken word poem that inspired the artwork, a crazy thing about a naked woman with dog slippers sitting at a bar with a massive, human sized chicken talking about those orange spider mites. Okay.

Its strengths: some of the best songs we had written to date:  The manic opener of “Holier Than Thou,” a satirical piece about any kind of hypocritical moral authority in which I get to do my best impression of an evangelical preacher; “Ba Ba,” a song that takes its title from the monosyllabic background vocal but delves more clearly than “Blue Refrigerator” could about the importance of self discovery and authenticity; “The Love Thing,” you know, about the love thing; other more serious and issue driven pieces; and a lot of really fine performances by so many good friends of ours. Overall, its variety, its manic qualities and its more reflective quiet moments, the instrumental experimentation (horns! acoustic guitars! improvisations! fake jazz!) the whole thing feels like a big ass party.

My goodness. There are four albums that I have yet to mention over the next two decades–the material that I am most proud of, actually. And I’m finding myself, on the eve of New Year’s Eve, at the end of potentially the most exhausting year in memory, unable to go further tonight. So I’ll leave you with this, a kind of sleeper from Once More With Feeling, but, as I’m re-listening now, nevertheless a tune that stands out as a favorite, and features a reunion of the 1987 band, Allen Hunter on bass and Greg Kirkelie on guitar. “Everybody’s made of something. What are you made of?” That’s a pretty good line.